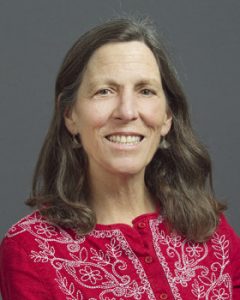 I went to Grinnell College in Grinnell, Iowa, a wonderful small college in the middle of nowhere with amazing faculty and great resources. I fell in love with plant morphology thanks to one of the faculty, Vern Durkee, who taught plant taxonomy. I did my graduate work at Washington University in St. Louis in the lab of Virginia Walbot. Using now-antiquated methods, I studied the genome of maize, determining the amount of repetitive DNA. Best of all, Virginia introduced me to maize geneticists such as Ed Coe, Gerry Neuffer, and Barbara McClintock. She also introduced me to Mike Freeling from the University of California, Berkeley, where I did my postdoc. Back then (1980), very few genes had been isolated, and only if they encoded abundant proteins. The maize waxy gene was cloned as it encodes an abundant protein in maize kernels. waxy was a hotbed for McClintock’s transposable elements given that the sectors were easy to detect by staining the endosperm with iodine. From the wild-type waxy recombinant DNA clone sequence, Nina Fedoroff’s team was able to clone mutable alleles and thereby obtain the sequence for the transposable element Ac and its defective element, Ds. alcohol dehydrogenase1 had also been cloned due to the abundance of its protein during anaerobiosis. Some of the adh1 mutant alleles had transposon insertions, and one was tightly linked to a Knotted1 (Kn1) phenotype. Because Ds elements move to linked sites, Mike Freeling and I reasoned that the same element might have jumped from adh1 to kn1. This Ds element was distinct, maybe only 10 copies in the genome, and we were able to clone kn1 with this element. Cloning Kn1 with transposons gave me a job at the –USDA–ARS facility, where I have been ever since. I presented the different mutant phenotypes we found in the transposon lines and argued that each of these would define an important gene. Our ARS unit, the Plant Gene Expression Center, has an agreement with UC Berkeley that allows us to mentor students. I have been here 32 years, so obviously it has been a fantastic arrangement.

What do you consider your most important contributions to plant science?

I would say it was cloning kn1. It was the first gene cloned that had an effect on development. Kn1 was found as a gain of function mutant allele; the transposon had landed in an intron and turned the gene on in leaves, when it normally expresses only in shoot meristems and unexpanded stems. The gain of function mutant phenotype affects proximal–distal patterning in the leaf, and that patterning remains a strong interest of mine. It took us a while to recognize the loss of function phenotype, because its penetrance is low and varies depending on inbred. We eventually discovered that, similar to its ortholog in Arabidopsis, shootmeristemless, kn1 is needed to keep the meristem initiating leaves, only in maize, a redundant gene masks this phenotype. As I had proposed to the ARS hiring committee, we went on to clone many interesting and important genes. Most of the time, a postdoc identified an interesting phenotype and took it with them to start their own lab. Genes cloned with transposons include terminal ear1, barren inflorescence2, fasciated ear2, tangled, and branched silkless. Transposon cloning was hard, so it was great once there was a corn genome sequence and we could use it for positional cloning. That led to cloning of many more genes, each with distinct and interesting phenotypes. Now, we spend the bulk of our time determining how the gene functions. I feel thankful that I have been able to study these fascinating phenotypes for a living. I am also happy that the cloning of these genes in maize, thanks to its great genetics, led to identifying important orthologs in other species.

I have no idea, but I am pretty sure I went to an ASPB meeting as a graduate student and had a poster, so it was probably sometime before 1980. I was a member of the editorial board of The Plant Cell for 7 years, and that work solidified my affection for the Society.

I have great respect for the ASPB journals and have published many papers in them. I don’t attend each ASPB meeting, but when I do attend, I am reminded of the breadth of plant biology and the fascinating stories around each corner.

As a graduate student, I was thrilled to be in school and have a project I could call my own (having been a waitress for the year between undergrad and grad school). I didn’t stop and wonder what my trajectory was. Finding a postdoc was similar; I met Mike Freeling and did not look further. I had two kids during that postdoc, so I was preoccupied with daily efforts and again did not think about “my career.” If my example holds true, I would say, try to enjoy graduate school and your postdoc career on their own. Be passionate about what you are doing at the moment. I might also add that meeting people is important, so try to broaden your net of contacts if possible. Going to meetings and talking with seminar speakers is a way to make these contacts. Listen to the seminar speaker, formulate a question, and then ask it. People will notice.