This Research in Focus is reprinted from an In Brief by Science Editor Jennifer Mach in The Plant Cell, which summarizes a new article by Paultre et al. This study explores how proteins move through the phloem.

Transport of macromolecules through the phloem has received increasing interest since the discovery that FLOWERING LOCUS T (FT) moves from leaves to the shoot apical meristem, where it induces flowering (Corbesier et al., 2007), indicating that macromolecules such as proteins and RNA can act as mobile regulators of gene expression in distant tissues. Indeed, Molnar et al. (2010) used grafting between Arabidopsis thaliana ecotypes and mutants to demonstrate that small interfering RNAs are mobile and can induce epigenetic modifications in distant cells. Thieme et al. (2015) used a similar grafting approach to identify more than 2,000 mobile mRNAs that likely move through the phloem. However, how macromolecules get into the phloem, particularly whether their mobility occurs specifically or as a result of their abundance and presence in the phloem companion cells, remains a subject of active research. For example, a recent Breakthrough Report showed that modeling of mRNA abundance and half-life could explain the presence of most of the mRNAs identified in phloem sap (Calderwood et al., 2016). For some mRNAs that do not fit the abundance model, Zhang et al. (2016) showed that tRNA-like structures in some mRNAs can trigger movement through the phloem. Thus, most RNAs likely enter the phloem sap non-specifically, although some do show sequence-specific transport.

In a recent Breakthrough Report, Paultre et al., (2016) address the movement of proteins through the phloem. They used a grafting system (see figure) where the protein or domain of interest is expressed from the 35S promoter as a fusion to green fluorescent protein (GFP) in the scion, which is then grafted onto a non-transgenic, wild-type rootstock. The authors then used confocal microscopy to examine the root tissues for fluorescence at ten days after grafting. A fusion of the chloroplast transit peptide of ferredoxin-NADP+ oxidoreductase to GFP was translocated across the graft junction and localized to plastids in the root stele. However, this fusion did not enter the endodermis or cortex, potentially indicating a size-based restriction for movement into these tissues. Fusions of GFP to other chloroplast transit peptides gave similar results, except for the transit peptide of RECA HOMOLOG1, which failed to translocate. The authors also observed movement and stele-specific unloading of GFP fused to signals targeting peroxisomes, the nucleus, and the actin cytoskeleton. Their corresponding mRNAs are all translated from cytoplasmic ribosomes; by contrast, fusions targeted to the endoplasmic reticulum lumen, membrane, or Golgi apparatus and expressed from endoplasmic reticulum ribosomes failed to translocate. Expression from the 35S and the companion cell-specific SUC2 promoters gave similar results, indicating that the fusions likely entered the phloem stream from the companion cells. 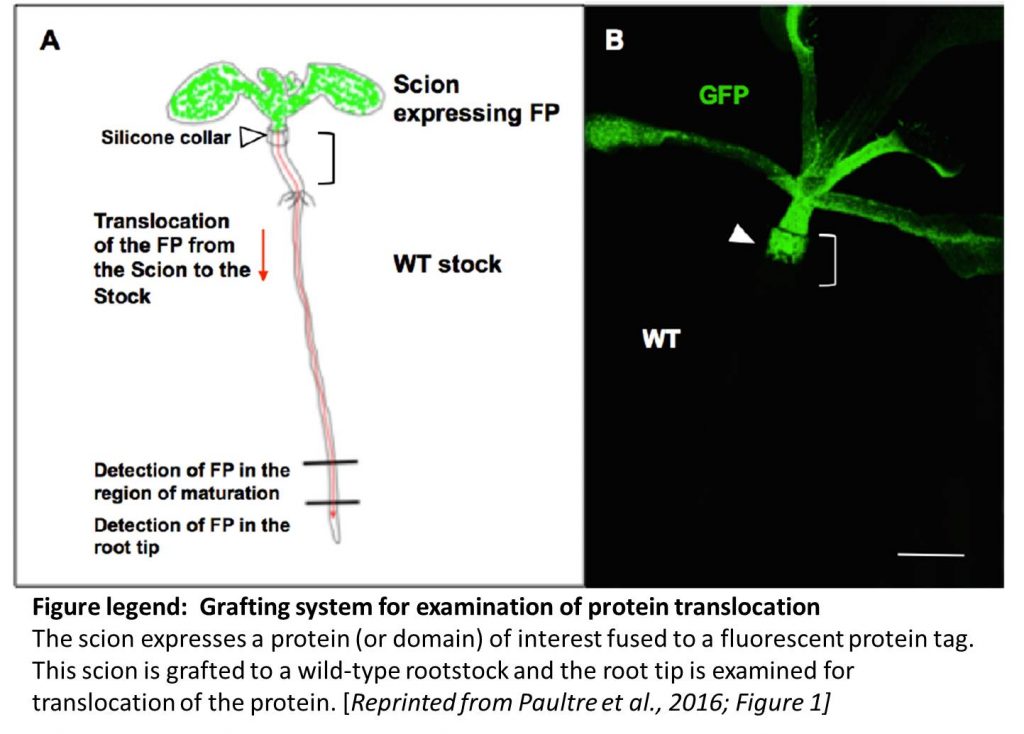 The fusion proteins were expressed from strong promoters, suggesting that protein abundance might affect whether proteins get into the phloem sap, similar to mRNAs. To examine this possibility, the authors next used a bioinformatic analysis to tease apart the relationships among protein abundance (approximated as transcript abundance in phloem companion cells), protein size, and likely presence in the translocation stream. This analysis showed that, for proteins under 70 kDa, as protein abundance increased the probability that the protein would move into the phloem stream increased. However, larger proteins were much less likely to move.

Therefore, this report shows that many proteins in the shoot companion cells can get swept away by the translocation stream and land in the root stele. This indicates that not every protein found in phloem exudate has a signaling function; indeed, FT is likely to be the exception rather than the rule. Similar to mRNAs, are some proteins transported specifically? Does this flow of proteins have some adaptive advantage for the plant? Much as we once labeled intergenic regions as junk DNA, do these proteins adrift in the translocation stream have a utility that remains to be discovered? We eagerly await the answers in future Breakthrough Reports.