Inositol phosphates are a family of small molecules in which one to eight phosphates are attached to an inositol ring. The number and positions of phosphates determine the molecules’ properties, which range from phosphate storage to vesicle trafficking, energy signaling and metabolism.

Inositol hexakisphosphate (InsP6, also known as phytate) has a phosphate group attached to each of the inositol’s six hydroxyl groups (see figure). Additional phosphates can be added by the formation of high-energy pyrophosphate (phosphate-phosphate) bonds, such as those found in ATP. Until recently, evidence for inositol pyrophosphates in plants was scarce, but two recently published papers have demonstrated their presence in plants, characterized enzymes involved in their production, and provided evidence for their role in jasmonate signaling.

Desai et al. (2014) showed that InsP7 and InsP8 occur in plants and characterized genes and enzymes involved in inositol pyrophosphate synthesis. Laha et al. (2015) showed that plants deficient in one of the inositol hexakisphosphate kinases are deficient in jasmonate responses including gene expression and resistance to insect herbivory and necrotrophic pathogens. Previously, the jasmonate receptor complex was shown to include InsP5 in the binding site, but Laha et al found that inositol pyrophosphates could also act as ligands, providing a molecular basis for the observed deficiencies in jasmonate responses. 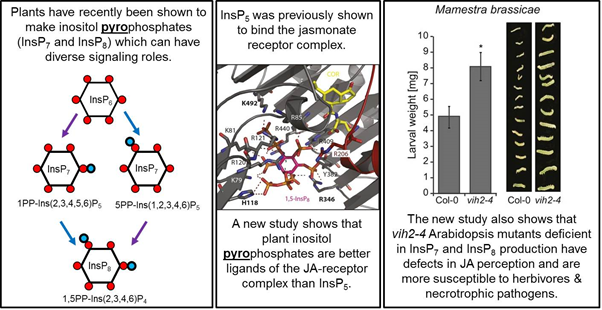 These exciting studies raise many questions.

For example, the specific structures of the pyrophosphates are not yet resolved, and it is likely that there are additional enzymes involved in their production in plants. Furthermore, like in animals, amoeba and fungi, additional functions for inositol pyrophosphates are likely to be identified. See Williams et al. (2015) for possible further functions for these small and enigmatic molecules.

This post is part of our “Research in Focus” series, highlighting significant plant science breakthroughs and discoveries from around the globe, by Mary Williams (https://twitter.com/PlantTeaching). If you have ideas or suggestions please email mwilliams@aspb.org, using Research in Focus as the subject, and include a link as well as an explanation of why this should be highlighted.