(This is a guest blog post; the opinions do not necessarily represent those of ASPB.)

It can be pretty scary starting your postdoc. Suddenly, you are not a student anymore. You are on your own. You need to figure it all by yourself. This is especially true when moving countries or continents for your postdoc. You can easily feel lost, alienated, and overwhelmed. The support for postdocs varies substantially between institutions and is mostly rudimentary. This is especially true when it comes to difficult situations between you and your PI or caused by other monetary issues. Your power and leverage as an individual postdoc is minimal compared to that of your PI or university administrators. You depend on your PI for publications and reference letters. You depend on the university for your income, or even your visa and the right to stay in your host country. On top of all this and in spite of all the hard work they put in, postdocs still face many challenges (as described here, here, here and here).

So when I started my postdoc at the University of California (UC) I was very happy to hear that we have a postdoc union. UAW5810, the UC postdoc union, represents all 6000 postdocs at 10 UC campuses. Since the first contract was negotiated in 2010, much has improved at UC. For the first time postdocs have guaranteed minimum salaries, guaranteed annual salary increases, affordable access to health care benefits, career development rights, paid time off and sick leave, protections against discrimination, and a process for fairly resolving disputes. Because I directly profited from all the hard work previous postdocs put into this contract, I decided to get involved and give back to the bigger community. I became an elected member of the leadership at my local campus.

Much has happened since then. Now the union provides the avenue for new postdocs to get the latest information and to meet people. Together with other members of our local leadership we have organized workshops on immigration, open access publishing and scholarly communication, grant writing, careers outside academia, and a software carpentry bootcamp. All of these events have been well received and are well attended, as there is not much other support provided for postdocs on this UC campus. By bringing postdocs together through workshops and social events, such as the monthly bar social or our bi-yearly BBQ in the park with friends and family, we are building community and real life social networks. These networks reduce the initial barriers to settle in at UC and can lead to lifelong friendships and even scientific collaborations.

I have met many amazing people at these events. Being involved in the postdoc union absolutely enriched my time at the UC. It taught me plenty of ‘soft’ skills, made me feel as part of a bigger community, and extended my network far beyond the lab and my field of research. Of course it also simply fun to hang out with fellow postdocs. Most importantly I know that by being involved in the union I have given back to my community and had a positive impact on postdocs’ daily lives.

Ordinary postdocs like us facilitate this positive change. This is only possible by joining together with a larger organization such as the UAW, which offers years of experience in labor issues and is taken seriously by the UC administration. This fact is best illustrated by our recent success at persuading the UC to reimburse postdocs that were wrongfully overcharged for their benefits. At several UC campuses many mostly international postdocs with their own fellowships were being overcharged for the health benefits that they were guaranteed by the contract. Some postdocs paid over $1000 instead of ~$50 per month to insure themselves and their dependents. Only by working together with and as a union did we guarantee that postdocs are reimbursed for their surplus charges. From now on UC will make an extra effort to prevent misinformation from reaching incoming postdocs and will ensure that all postdocs have full access to health benefits. This is one great success from us postdocs exercising our collective power.

We know that postdocs at many other institutions here in the US face similar issues of low pay and inadequate health benefits. A recent survey revealed that less than 50% of institutions pay postdocs according to the NIH minimum pay scale. It is time for postdocs all over the United States to be treated fairly. Postdocs at the University of California are leading the way and we are here to help. We hope that postdocs everywhere can benefit from the lessons we’ve learned and improvements we’ve made to our daily lives by building our union, UAW5810. Get in touch if you want to take action and improve the situation at your institution, and read more here. 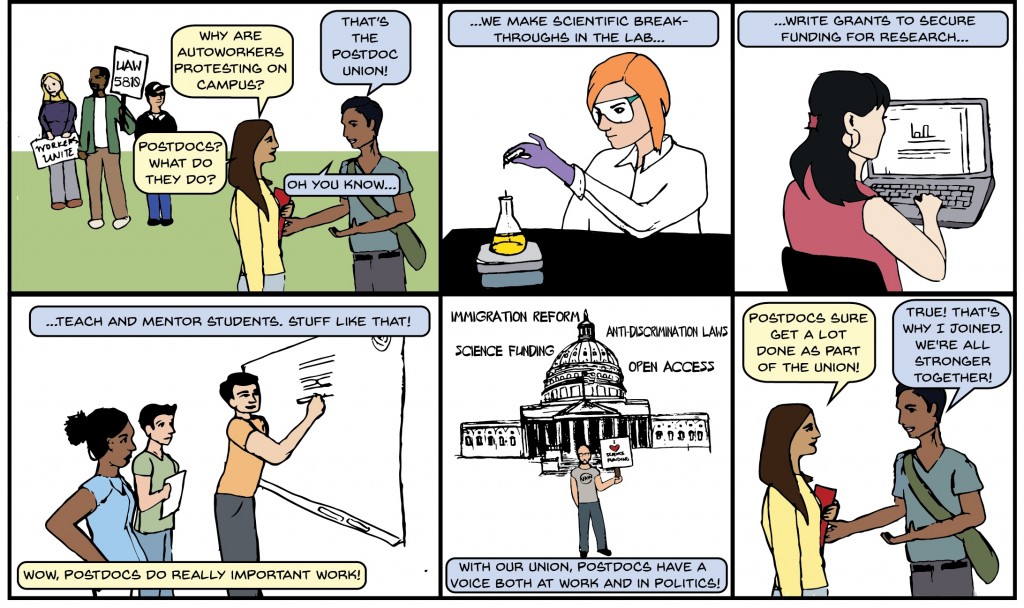 Benjamin Schwessinger is wrapping up 3.5 year-long enjoyable stay as postdoc in the lab of Pamela Ronald at UC Davis. His stay in the lab was supported by an European Molecular Biology Organization (EMBO) and an Human Frontier Science Program (HFSP) long-term fellowship. The next step will take him to Australia to gain more independence at the Australian National University with the support of an Discovery Early Career Researcher Award (DECRA) with John Rathjen as his mentor. If he isn’t busy doing science and politics, Benjamin enjoys a long swim and hanging out with family. Find Benjamin on Twitter @schwessinger and his blog.

A longer article by Benjamin and other members of the UC Davis postdoc union is published in eLIFE.

The author would like to thank Jessica Budke for thoughtful comments and suggestions that improved this post.