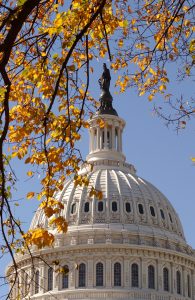 Last week marked the end of the first partial shutdown of the U.S. federal government since the Clinton administration. In the final days of the impasse, Senate Majority Leader Harry Reid (NV) and Minority Leader Mitch McConnell (KY) were able to broker a deal to reopen the government and raise the debt limit.

The deal was passed by Congress, signed into law by the president, and included provisions to fund the federal government through Jan. 15th, 2014; suspend the debt limit until Feb. 7th, 2014; and create a December 13th, 2013 deadline for Congress to craft a framework for a broader budget deal.

In an immediate sense, the short-term agreement has cleared the legislative brush to allow Congress to return to other legislative priorities that have languished on the vine. One example is the 2013 Farm bill, which had stalled mainly due to disagreements over the funding of nutrition programs, colloquially known as food stamps. Similarly, the process to draft the bill that reauthorizes the Department of Energy, the National Science Foundation, and a handful of other science agencies has resumed in the wake of the government shutdown.

In spite of the brief window of opportunity the deal has created for the passage of non-spending bills, the legislative spigot will again close as Congress nears its Dec. 13th deadline to produce a longer-term budget structure. Republicans still want to repeal or defund “Obamacare,” as well as to preserve previous non-security budget cuts, reform entitlement programs, and lower effective tax rates. There is, however, deep division between the “establishment” and “tea party” wings of the conference with regard to the prioritization of these issues.

For their part, Democrats want to move on immigration reform and sequestration, the subsequent implementation of which is scheduled to take place on Jan. 15th, the same day as the expiration of the government’s current funding bill.

While the outcome of the next big fight is unknown, the legislative outlook is again shaping up to be another perfect storm.