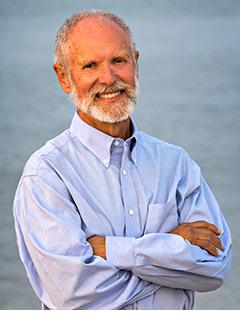 How did you spend your career?
I spent most of my time at a university and USDA, where my work explored plant–water relations, in recognition that water is a limiting resource that is consumed by plants in huge amounts.

What do you consider to be your most important contribution to plant science?
Fortunately, the study of plant– water relations underwent major changes starting about 50 years ago with thermodynamically based methods for measuring plant water status. These methods allowed hydration conditions to be reproduced. The ability to repeat experiments is a key to all experimental science, and it allowed us to do much more in water relations research than in the past. After developing thermodynamic methods for a couple of years, our experiments showed that photosynthesis is more sensitive than respiration to dehydration during a drought. The marked sensitivity of photosynthesis to drought allowed us to test whether enzymes were responding directly to water deficits. These tests indicated that enzymes were not responding directly to water deficits, and they gave us a way to test whether closing stomata (which conserves water but limits CO2 entry) were the cause of limited photosynthesis. Because limited photosynthesis was also accompanied by diminishing CO2 demand, it seemed that photosynthesis might acclimate to water deficits. Our tests showed not only that this occurred, but also that cellular Mg2+ concentrations were central controllers of the acclimation. Osmotic adjustment was discovered in a form that used photosynthetic products to maintain turgor and allowed growth where otherwise none would occur. It was found that low water potentials were induced by the growth process itself and were important controllers of growth rates in land plants. Mature organs didn’t show these potentials. In an alga surrounded by water and thus unaffected by these potentials, an unusual chemistry of pectin determined cell enlargement. This was the first time the chemistry of growth was described in a plant, and most plants contain pectin in their cell walls. Ultimately it became possible to reverse reproductive failure during a drought by feeding photosynthetic products to the plant, which led to identification of the biochemical origins of failure and gene targets that can enhance tolerance to the environment. In fact, commercial agriculture increasingly sees drought tolerance as an important plant character, and it is gratifying that reproductive reversal by feeding photosynthetic products may be contributing to this effort. Although plant–water relations are inherently multigenic and complex, these findings demonstrate the benefits of understanding plant–water relations, something scarcely imagined 50 years ago.

When did you become a member of ASPP/ASPB?
It was when I was a grad student in 1963, after attending several ASPP conferences.

What important advice would you give to individuals at the start of their career in plant science?
Always be willing to adopt new ideas and methods. Physical chemistry and classical thermodynamics have helped me greatly.