This week we feature mangroves, a polyphyletic group of plants that live in tropical intertidal zones. Mangroves are in the news as a consequence of a new paper out in Nature (Lovelock et al., 2015) that describes their great vulnerability to sea-level rise (see also Saintilan et al., 2015). 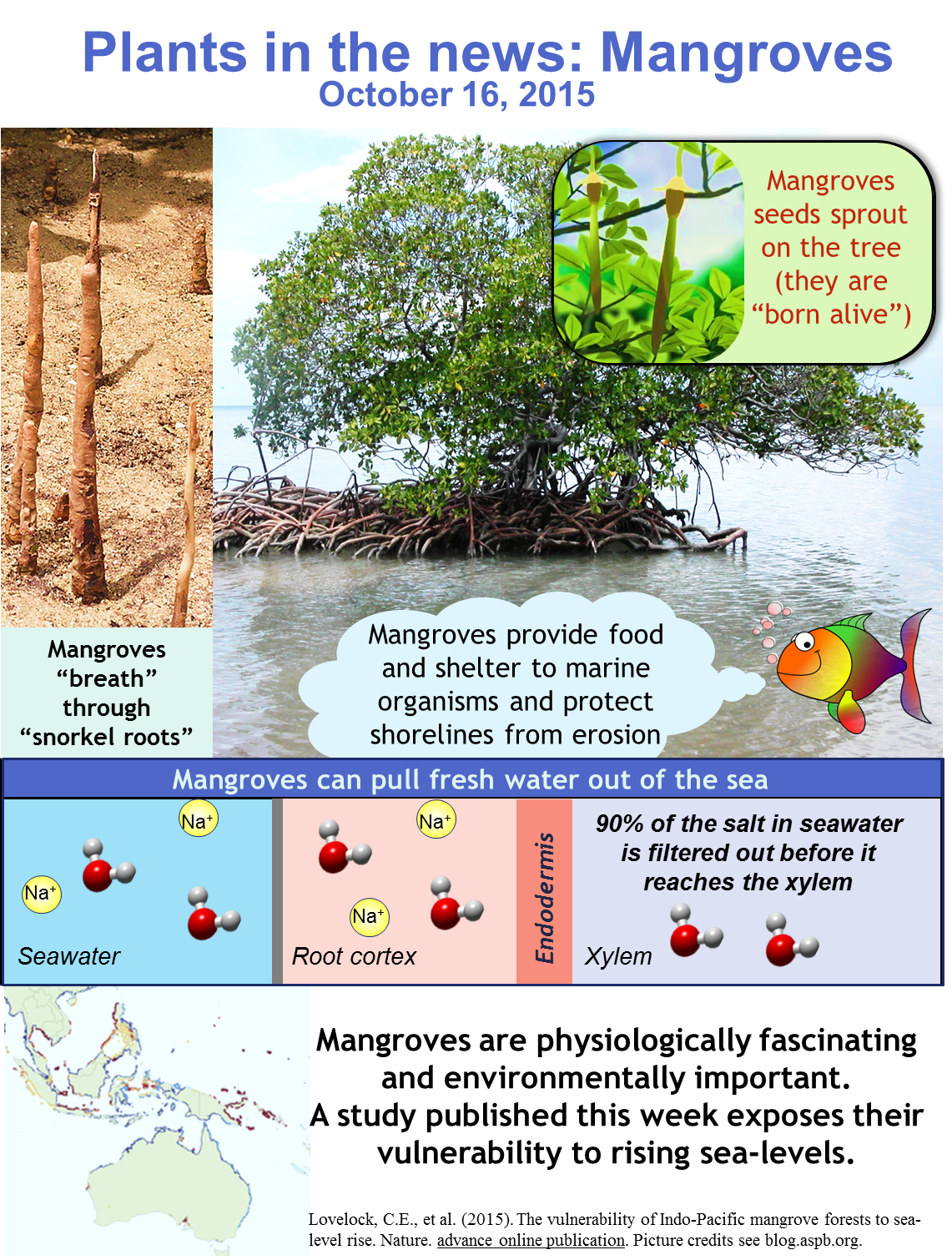 Mangrove is a term used to describe a group of highly adapted tropical intertidal trees or shrubs that share the feature of growing with their roots in brackish water or seawater. The physiology of these plants is quite unusual and is a product of convergent evolution; mangroves come from many families including Rhizophoraceae which includes the red mangrove (Rhizophora mangle) and Acanthaceae which includes the black mangrove (Avicennia germinans).

Their major ecological contribution is a function of where they grow. By forming massive root systems within the intertidal zone, they support and strengthen shorelines. By dampening wave impacts, they resist erosion and suppress the damage of tsunamis (video). They provide food for intertidal and marine organisms and their submerged root systems provide important nurseries for marine organisms (Adam, 1999; American Museum of Natural History, 2004; Ng and Sivasothi, 2001; Mangrove Watch Australia, 2013; Selvam, 2007).

Mangroves have adapted to a very unusual environment, resulting in some physiological oddities that are fun to teach and learn about.

Mangroves have adapted to their environment through the development of very low water potentials in living cells, by the accumulation solutes such as proline. The low water potential in their leaves allows them to pull fresh water into the roots, excluding salt by ultrafiltration through cell membranes and the endodermis. To accomplish this, they also must develop a great deal of xylem tension (see Williams et al., 2014). In 1964, the plant physiologist Per Scholander (who developed the Scholander pressure chamber) predicted and then measured a very low xylem tension in mangroves, much lower than that of a “typical” plant (Scholander et al. 1962, 1964, 1965). Industrially, seawater can be desalinized in a reverse-osmosis system by using pressure to push water through a selective filter; the same mechanism that allows a mangrove to suck fresh water in from the sea.

Mangroves pump out salt from their leaves

Mangroves face many of the same challenges faced by other halophytes (plants that are adapted to grow in salt water or salty soils) (Flowers and Colmer 2008; Kraus and Ball, 2013; Parida and Jha, 2010). Salt is usually harmful and needs to be kept out of the cytosol, even in salt-tolerant plants. One strategy used by many halophytes including mangroves is to pump salt out of their leaves through salt glands (Tan et al., 2013). One day, it may be possible to engineer salt-extruding systems into other plants to enable them to cope better with saline soils (see more at Williams and Blatt, 2014).

Mangroves give birth to live young

Seawater can be a particularly challenging environment for dry seeds, which need to hydrate in order to germinate. Mangroves (and many other halophytes) can get around this problem through vivipary (live birth) or cryptovivipary (hidden live birth) (Elmqvist and Cox, 1996). Seeds sprout while still attached to the parent tree (the sprouted seeds are known as propagules), and their distinctive elongation may help them to avoid drowning once they fall off the tree (Tomlinson and Cox, 2000). In some cases propagules can drift in the sea for several weeks before becoming established. Here is a beautiful video showing this process, created by Ramesh Boonratana.

Mangroves are vital contributors to tropical ecosystems and distinctive and fascinating plants. The new findings of Lovelock et al indicate that in 69% of their mangrove study sites the rate of sea level rise exceeds that of shoreline elevation (due to anthropomorphic changes in land use), with some sites predicted to be submerged and so uninhabitable by mangroves as soon as 2070.

Maybe drowning mangroves don’t push the same emotional buttons as drowning polar bears, but they are no less meaningful and alarming as symbols of how our Earth is changing

Ng, P.K.L., and Sivasothi, N. eds). (2001). Guide to the Mangroves of Singapore. Raffles Museum of Biodiversity Research, The National University of Singapore & The Singapore Science Centre.