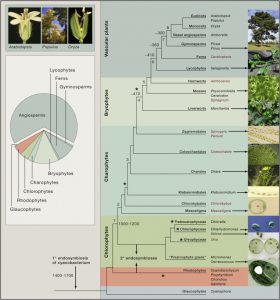 Arabidopsis thaliana has been and continues to be a great model for understanding plant biology, but it doesn’t do everything. Chang et al. outline the other important green-lineage models, from green algae to monocots, in terms of their contributions to our understanding of plant evolution as well as specialized functions such as nitrogen fixation and bioenergy production. The accompanying illustrated phylogeny would look nice on any lab wall, too. Cell 10.1016/j.cell.2016.08.031 Tags: Evolution, Genomics 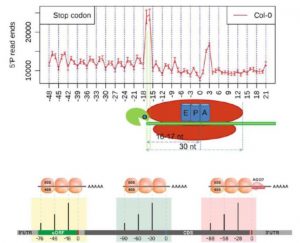 Eukaryotic mRNAs are capped by a 5’ 7-methyl guanosine. Uncapped mRNAs can indicate that the mRNA is undergoing degradation or has been subject to nuclease digestion, for example as a consequence of small RNA-induced silencing. Some mRNAs are degraded even while being translated, in a process known as co-translational RNA decay. Hou et al. and Yu et al. present results from sequencing uncapped RNAs, and reveal new insights into ribosome dynamics. For example, there is a clear indication of three-nucleotide periodicity in RNA degradation products, confirming that ribosomes move from codon-to-codon. Other insights reveal differential ribosome stalling near different stop codons and as a consequence of upstream open-reading frames. Plant Cell 10.1105/tpc.16.00295, 10.1105/tpc.16.00456 Tags: Gene Regulation, Genomics, Molecular Biology 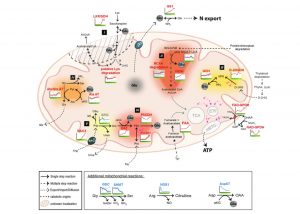 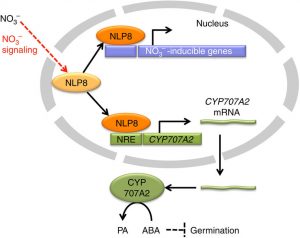 Proteomic atlas of a model legume and its nitrogen-fixing endosymbiont ($) 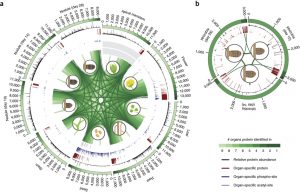 The complex symbiosis that takes place between legumes and their rhizobial partners is responsible for a significant amount of protein that enters the human diet. Additional, this cross-kingdom co-evolution of signals and responses is inherently fascinating. Marx et al. build upon the known genomic and transcriptomic databases to describe a proteomic atlas that includes more than 23,000 proteins along with their post-translational modifications. Besides creating an important tool, their work identifies an important calmodulin-binding protein and putative bioactive peptides. Nature Biotech. 10.1038/nbt.3681 Tags: Biochemistry, Biotic Interactions, Signals and Responses

Effect of life span on germline cell divisions and mutations ($) 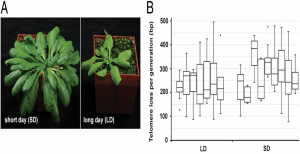 Animals set aside their germline cells early in embryo development; this strategy safeguards genomic integrity because there are few rounds of error-prone cell division between generations. By contrast, gamete progenitors are formed later in the plant lifecycle, meaning that the number of cell divisions and potential mutations between generations can be significant. Watson et al. compared cell division number and mutation rate in Arabidopsis plants grown in long days (with a short vegetative phase) and short days (with a long vegetative phase). Their findings, that the number of cell divisions between generations is largely independent of life span, supports a model in which vegetative tissues are derived from a pool of mitotically active meristematic cells, whereas germline cells are derived from largely quiescent stem cells in the shoot apical meristem. PNAS 10.1073/pnas.1609686113 Tags: Development

Cavitation occurs when the tension acting on the column of water in the xylem conduits leads to the expansion of gas bubbles and the formation of embolisms that block water transport. Guard cell closure can help to prevent cavitation by preventing excessively negative pressures, but this is not a fail-proof strategy. Zhang et al. examined xylem conduits of red oak at progressively lower water potentials, and found that the smallest veins in the leaf exhibit reversible collapse at high tension. This strategy can effectively protect larger veins from cavitation. Plant Physiol. 10.1104/pp.16.01191  Tags: Abiotic interactions, Ecophysiology, Physiology, Transport 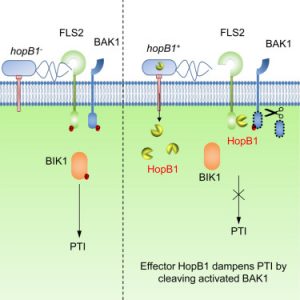 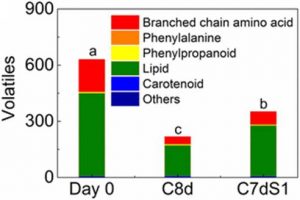 You can’t beat the taste of a tomato fresh off the vine, right? Zhang et al. investigate how short-term chilling (such as occurs when tomatoes are shipped) affects flavor. Chilling alters the tomato fruit metabolome and transcriptome, as well as the pattern of methylation at promoters of several genes involved in flavor production and ripening. Furthermore, chilling decreases production of volatiles associated with consumer preference. Yes, tomatoes really do taste better when you grow them yourself. PNAS 10.1073/pnas.1613910113 Tags: Applied Plant Biology, Gene Regulation, Metabolism 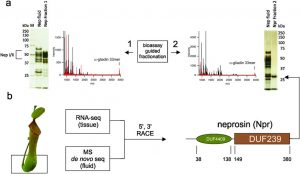 Patients with celiac disease have an inflammatory response to proline-rich peptides derived from gliadin, a component of gluten. Dietary enzyme augmentation to ensure the full processing of proline-rich gliadin-derived peptides might prevent the inflammatory response.  Starting with 5 L of secretion fluid collected from 1000 pitchers of Nepenthes spp., Rey et al. identified a novel protease with high activity against proline-rich peptides that is effective in the low pH characteristic of gastric fluids. Celiac mouse models did not show the intestinal inflammatory response when fed gliadins pretreated with the pitcher plant protease, suggesting that this therapy might be effective in humans. Scientific Reports 10.1038/srep30980 Tags: Applied Plant Biology, Biochemistry, Biotic Interactions 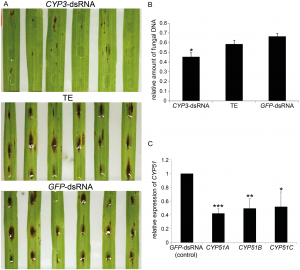 RNA silencing can be an effective way to suppress a pathogen, as shown by studies of transgenic plants. Koch et al. demonstrate that the benefit of RNAi can be conferred by spraying barley plants with a  a solution containing long dsRNA sequences that correspond to fungal genes. The long dsRNA is taken up by the plant and transferred to the infection site, where the fungal silencing machinery is required for effective suppression of the pathogen. This study demonstrates the effectiveness of Spray-Induced Gene Silencing (SIGS) as an alternative to GM approaches. PLOS Pathogens  10.1371/journal.ppat.1005901 Tags: Applied Plant Biology, Biotic Interactions, Gene Regulation 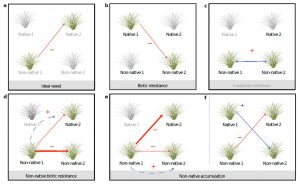 Across the globe, forests with more species diversity are also more productive ($)

There is a well-documented correlation between vegetative species richness and ecosystem productivity. In a collaboration involving more than 80 researchers and institutions, Liang et al. now show a positive Biodiversity-Productivity Relationship (BPR) holds for forests in 44 countries spanning the globe. These findings reveal that as species richness decreases, so does productivity, and highlights the need to promote biological conservation in forestry practices.  Science 10.1126/science.aaf8957 Tags: Environmental Plant Biology