Rhizodeposition refers to the release of organic compounds from roots into soil. Rhizodeposits alter the composition and structure of soil and also provide food for soil microbes whose actions can increase the bioavailability of soil organic matter. Preece and Peñuelas review how drought affects rhizodeposition, which in turn affects soil communities. One finding is that mild drought can increase rhizodeposition as a consequence of an increase in root growth and metabolism as well as release of organic material from dying roots. Another conclusion is that there are significant interspecies differences in how drought affects rhizodeposition, suggesting that greater diversity in plant communities should increase the resiliency of soil communities to drought. Plant Soil 10.1007/s11104-016-3090-z Tags: Abiotic interactions, Biotic Interactions, Botany, Ecophysiology, Environmental Plant Biology 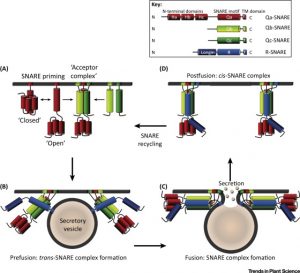 The plasma membrane is a selectively permeable barrier that maintains differential charge as well as different ionic compositions across it. Ions move across the plasma membrane through highly regulated pumps and channels. When a cell expands, new lipids and proteins are added to the plasma membrane through vesicle fusion. Karnik et al. review how ion transport, cell volume and cell turgor are coordinated, and point to a role for a conserved subset of soluble SNARE proteins that regulate channel activity and also vesicle fusion. Trends Plant Sci. 10.1016/j.tplants.2016.10.006 Tags: Bioenergetics, Cell Biology, Growth Regulation, Signals and Responses, Transport 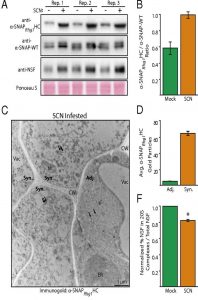 Rhg1 is a locus that confers resistance to Heterodera glycines (also known as soybean cyst nematode), and it is one of the most economically-important of all disease resistance loci. Bayless et al. show that the resistance Rhg1 locus encodes a defective α-SNAP that interferes with vesicle recycling. Rhg1 is an incompletely penetrant dominant-negative allele, and the non-defective gene copies ensure that essential housekeeping functions can occur. At the nematode feeding site, the balance of alleles changes; the resistant-type α-SNAP accumulates and reduces the pathogen’s viability. Proc. Natl. Acad. Sci. USA 10.1073/pnas.1610150113 Tags: Biotic Interactions, Cell Biology 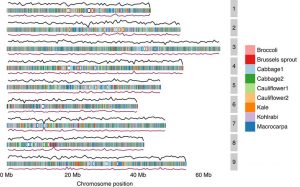 What do broccoli, Brussels sprouts, cabbage, cauliflower, kale and kohlrabi have in common? They are all the same species, Brassica oleracea. Golicz et al. identify the pangenome  (full genomic makeup) of this species by comparing the genomes of these different varieties. They find that about 80% of the pangemone is present in all lines, and almost 20% shows presence / absence variants or copy number variants among the different lines. Of this latter group, many are thought to be involved in traits such as disease resistance, flowering time, or glucosinolate metabolism. Nature Comm. 10.1038/ncomms13390 Tags: Applied Plant Biology, Botany, Genomics 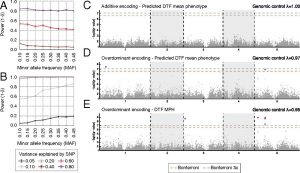 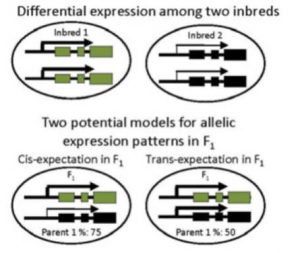 The expression level of stress-induced genes was examined in parental inbred lines and their F1 hybrid progeny. Where a gene was more highly expressed in one parent than another, it is possible to determine if that effect is due to a difference in cis or trans regulatory variation. For example, if it is cis-determined, the relative expression level of each parental allele should reflect that of the inbred parent. However, it it is trans-determined, the two alleles ought to show similar levels of expression. Waters et al. show that most but not all differential regulation arises from cis-regulatory variation. Plant J. 10.1111/tpj.13414 Tags: Abiotic Interactions, Genetics

A unique plasma-membrane and ER contact induces signaling in plants ($) 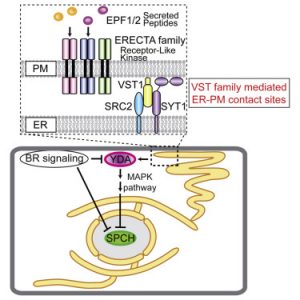 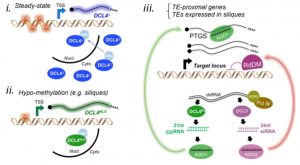 Auxin acts through MONOPTEROS in patterning and phyllotaxy 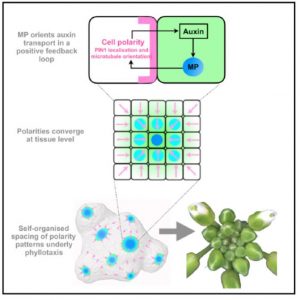 Leaf initiation has been correlated with very dynamic changes in auxin movement, conferred by relocation of the auxin efflux protein PIN1. Bhatia et al. show that the auxin-regulated transcription factor MONOPTEROS (MP) can function non-cell autonomously to affect the distribution of PIN1. Therefore, auxin distribution acts through MP, which affects PIN1, which affects auxin distribution in a positive feedback loop that ultimately leads to  organ formation. The authors also discuss the implications of their work in light of previous studies that show a role for mechanical stress in cell polarity. Curr. Biol. 10.1016/j.cub.2016.09.044 Tags: Cell Biology, Development, Signals and Responses 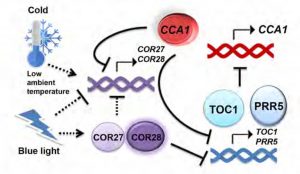 COR27 and COR28 were initially identified as cold-responsive genes and encode proteins of unknown function. Li et al. show that these genes are regulated by blue light,  and loss-of-function mutants show a significant delay in flowering. They also showed that the CCA1 transcription factor binds the promoters of COR27 and COR28, and that loss-of-function of overexpression of these genes affects the circadian period. Finally, they show an association of COR27 and COR28 with the chromatin of clock element genes TOC1 and PRR5, although this interaction does not appear to be with the DNA directly.  Plant Cell.  10.1105/tpc.16.00354 Tags: Abiotic Interactions, Gene Regulation, Signals and Responses 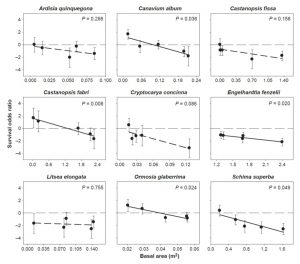 One of the many theories explaining the mechanism by which abundance and coexistence of different species in plant communities is regulated proposes that host-specific natural pathogens could cause high seedling mortality when seedlings grow near their parent trees. This plant-soil feedback would then pave the road to more tolerant and rare species, consequently maintaining diversity in forests. In this paper, after surveying ~11500 seedlings of almost 200 species over the course of 6 years, Liang et al. show that the lower survival of seedlings is directly correlated with high density of conspecific adult trees in their forest surroundings. In addition, they also show that a greater abundance of conspecific trees is associated with more soil-pathogens below ground, and this in turn causes higher seedling mortality. In this way, the authors show consistent evidence of a plant-soil feedback mechanism that may shape subtropical forests community structure.  (Summary by Gabriela Auge) Ecol. Lett. doi: 10.1111/ele.12694 Tags: Biotic Interactions, Botany, Environmental Plant Biology 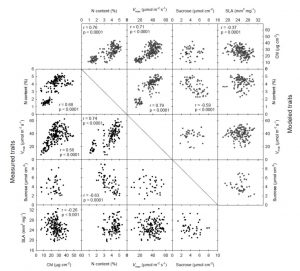 It’s so easy to internalize diagrams that show a big empty cell with one or a few proteins interacting*. Yu et al. have created a 4-dimensional simulation of the contents of a living cell. Their simulation reveals that interactions with other proteins affects the structure of many proteins in diverse ways, and that small molecules become trapped in the network of larger molecules. As the author indicate, “This work is a first step towards physically realistic in silico whole-cell models that connect molecular with cellular biology.” The movies that accompany this article, two of which are shown below, are must-sees. eLife 10.7554/eLife.19274 Tags: Biochemistry, Computational Biology *David Goodsell from the Scripps Research Institute has been painting similarly complex images of cell interiors for many years. A collection of images available for reuse is available here and his personal webpage is here.