Review: The sexual advantage of looking, smelling and tasting good, the metabolic network that produces signals for pollinators ($) 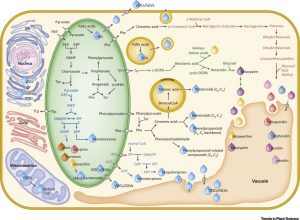 The interaction between angiosperms and their pollinators provides an excellent system to study co-evolution, and underpins the evolution of the biosynthesis of numerous interesting and useful specialized metabolites, from pigments to fragrances. Borghi et al. review the metabolic pathways that produce these signals and rewards for pollinators. Classes of compounds discussed in terms of synthesis and function include flavonoids, carotenoids, betalains, terpenoids, phenylpropanoids, green leaf volatiles and nectar. The authors also discuss trade-offs between pigments and color and odor, and how these signals and rewards affect pollination success. The integration of biochemistry and pollinator ecology makes this review particularly appealing for teaching. Trends Plant Sci. 10.1016/j.tplants.2016.12.009 Tags: Biochemistry, Biotic Interactions, Education and Outreach, Evolution, Gene Regulation, Metabolism 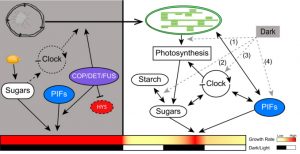 Plants use light as a source of energy and information; however, they are also sensitive and respond to  light/dark diurnal cycling, with many processes happening during the dark phase of the diurnal cycle. In this review, Seluzicki et al. emphasize the importance of studying and understanding what happens with the physiology of plants in darkness. Focusing on growth and development in dark and in dark/light cycles, the authors give us a detailed account of current understanding of molecular processes underlying plant responses to darkness, including the roles of key players such as photoreceptors, transcription factors and hormones. The importance of the circadian clock and skotomorphogenesis (dark growth form) is discussed in the light of their potential multilineage evolutionary origins. The review is an exhaustive summary of many years of studies of numerous groups working on understanding how plants adjust their developmental programs in anticipation of the dark/light cycles. (Summary by Gaby Auge) Plant Cell Environ. doi: 10.1111/pce.12900 Tags: Cell Biology, Computational Biology, Development, Ecophysiology, Evolution, Gene Regulation, Metabolism, Physiology, Signals and Responses 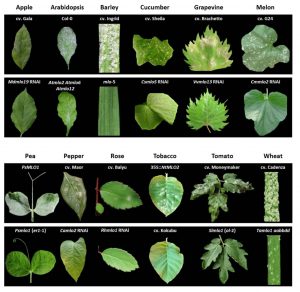 Powdery mildew disease is a broad term that encompasses more than 650 species of powdery mildew fungi that affect about 10,000 plant species, with serious economic consequences.  In the 1930s/40s, broad-spectrum resistance to powdery mildew was found in barley with a loss-of-function of the Mildew resistance locus o (Mlo) gene. Subsequently, resistance conferred by induced and natural loss-of-function alleles of the Mlo gene has been demonstrated in other species. Kusch and Panstruga review research into the molecular function of MLO and the molecular basis of mlo-based resistance, as well as side-effects of mlo-based resistance and efforts to extend it to other plants. Mol. Plant Microbe Interact. 10.1094/MPMI-12-16-0255-CR Tags: Applied Plant Biology, Biotic Interactions, Genetics 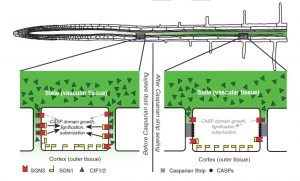 The Casparian strip is a permeability barrier that seals the spaces between root endodermis cells and so prevents bulk-flow uptake of solutes. Previously, a leucine-rich repeat receptor kinase called SCHENGEN3 or GASSHO1 (GSO1/SGN3) was identified as necessary for normal Casparian strip formation. Now, two papers in Science show that the interaction between diffusible peptides and GSO1/SGN3 regulates lignification (hence sealing) of the Casparian strip. Nakayama et al. (10.1126/science.aai9057) identified two genes encoding peptides named CASPARIAN STRIP INTEGRITY FACTORS (CIF1 and CIF2), which they then demonstrated to be ligands for GSO1/SGN3. Doblas et al. (10.1126/science.aaj1562) showed that the mutant schengen2, which has a phenotype similar to sgn3, encodes an enzyme necessary for tyrosine sulfation of the CIF peptides; they further showed that the sgn2 mutant phenotype is complemented by the sulfated CIF peptides. Based on these studies, a “barrier surveillance” model is proposed in which a leaky endodermis permits CIF1 and CIF2 (produced interior to the endodermis) to move outwards and bind to the SGN3 receptor on the outer surface of the endodermis, signaling lignin production to seal the leak. Tags: Cell Biology, Development, Ecophysiology, Transport 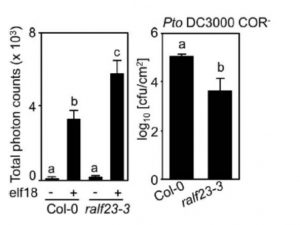 Continuing the theme of peptide signaling, Stegmann et al. showed that a subset of the RALF (RAPID ALKALINIZATION FACTOR) family of plant peptides can negatively regulate plant immune responses. When plants are treated with flg22, a peptide epitope of bacterial flagellin, they produce reactive oxygen species (ROS) as part of their defense response. The flg22 epitope is perceived by the receptor kinase FLS2. Co-application of flg22 and RALF23 or RALF33 (following their proteolytic release from the propeptide) suppresses ROS production. The receptor kinase FERONIA (FER) is necessary for RALF-mediated suppression of immunity; FER has also been shown to have a positive role in immunity by facilitating FLS2 complex formation with its co-receptor BAK1 potentially by binding to other RALF peptides that positively regulate immunity. These results show that FER fine-tunes immune receptor complex formation, via the perception of competitive endogenous peptides, which could have wide implications to understand the function of FER in multiple plant processes. Science 10.1126/science.aal2541 Tags: Biotic Interactions, Cell Biology, Signals and Responses 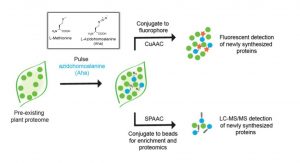 Glenn et al. introduce a new method for the labeling and purification of newly-synthesized proteins from intact tissues. The method, named BONCAT (Bioorthogonal Non-Canonical Amino Acid Tagging) involves the incorporation of the non-canonical methionine surrogate azidohomoalanine (Aha) into newly synthesized proteins. Aha has a reactive azide side chain that can be conjugated for instance to a fluorescent dye for visualization, or to a bead for purification. The authors demonstrate the application of this method through an analysis of proteins induced by heat stress and recovery. Finally, the authors observe that this new method can be carried out with commercially-available reagents and without the need for specialized equipment beyond that found in a standard proteomics lab.  Plant Physiol. 10.1104/pp.16.01762 Tags: Abiotic Interactions, Biochemistry, Gene Regulation 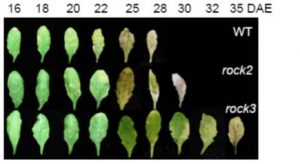 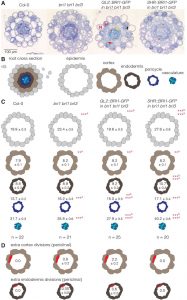 It’s been 20 years since the identification of BRI1, the first brassinosteroid (BR) receptor. Although many components of the BR signaling pathways have been identified, details continue to be revealed. Kang et al. examined the phenotype of a triple mutant, bri1 brl1 brl3, that lacks all three functional BR receptors. Root elongation and protophloem differentiation are both impaired in the triple mutant, and as expected fail to be rescued by exogenous BR application. The impact of adding back functional BRI1 in a cell-restricted pattern was assessed; the root meristem phenotype was not fully rescued by BRI1 expression in the epidermis or in the non-protophloem stele cells, but was rescued by expression solely in the protophloem cells. These results indicate that BR’s effects in the root involve partly cell-autonomous and partly non-cell-autonomous effects and reveal an unexpected role of the protophloem in systemically conveying BR effects in the root meristem. Development 10.1242/dev.145623 Tags: Development, Growth Regulation

The origin of floral identity quartets 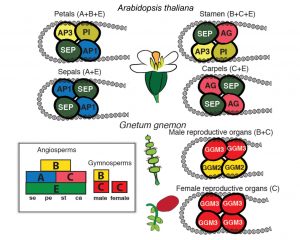 Where do flowers come from? Their sudden appearance and rapid radiation was described as an “abominable mystery” by Charles Darwin. Ruelens et al. examine the genetic toolkit that underpins reproductive organ formation in gymnosperms to uncover the origins of flowers (which they pragmatically describe as “an assembly of protective, attractive and reproductive male and female leaf-like organs”). The authors compare the four-protein complexes (floral identity quartets) that bind to and regulate genes that produce reproductive organs in angiosperms and gymnosperms. From protein phylogenies, the authors identify and reconstruct putative, ancestral forms of these DNA-binding proteins, and examine their interactions in vitro and in yeast cells. Their study finds that the angiosperm floral quartets arose by gene duplication just before the origin of flowering plants, and that the subsequent protein interaction changes were the result of gradual and reversible evolutionary change. Plant Cell 10.1105/tpc.16.00366 Tags: Botany, Computational Biology, Development, Evolution

Regulation of tulip flowering by temperature ($)

Cultivation of Tulipa gesneriana (tulip), an economically important species due to its ornamental value, can be affected by warming winters, leading to low quality flowers produced out of season. Leeggangers et al. have sequenced RNA and used top-down and bottom-up approaches in tulips grown in two contrasting environments (cool and warm temperatures) to shed light on the molecular network underlying flowering induction and to study how temperature could affect such a network. With both approaches, the authors have identified several temperature-responsive genes that could be regulating the timing of the transition between vegetative and reproductive growth, some of them similar to known components of the Arabidopsis flowering pathway. The expression of some of these genes differs in cultivars with different temperature susceptibilities and correlates with phase transition, providing important information to develop tools for cultivar improvement and climate change adaptation. (Summary by Gaby Auge) Plant Physiol. doi:10.1104/pp.16.01758 Tags: Applied Plant Biology, Development, Ecophysiology, Gene Regulation, Signals and Responses 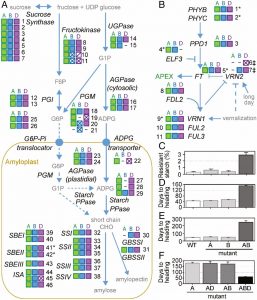 One of the big challenges of working with wheat, as compared to rice, is that the wheat we eat is polyploid; bread wheat (Triticum aestivum) is hexaploid (six copies of each gene) and pasta wheat (Triticum turgidum) is tetraploid (four copies each). Polyploidy makes forward genetics difficult; knocking out one gene rarely leads to phenotypic change due to the masking effect of all the others. Krasileva et al. developed a wheat exome (coding region) capture platform that enabled them to examine more than 10 million mutations, which they mapped to genes. The authors have made these data publically available along with corresponding primers and seed stocks . These resources will be invaluable for both basic researchers and breeders. Proc. Natl. Acad. Sci. USA  10.1073/pnas.1619268114 Tags: Applied Plant Biology, Genetics, Genomics, 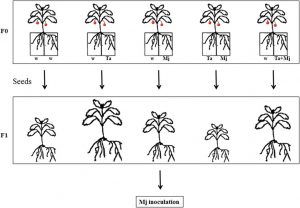 Root-knot nematodes including Meloidogyne javanica are major agricultural pests. Previous studies have shown that biocontrol agents including species of the fungal genus Trichoderma interfere with root-knot nematode pathogenicity, directly through effects on the nematode, and indirectly through a stimulation of plant defenses (priming).  Medeiros et al. investigated the mechanism of priming by Trichoderma atroviride, using a tomato split-root system in which the pathogen and biocontrol agent could be inoculated seperately or together. In roots exposed to the nematode, there was an enhancement of resistance when the fungus was co-inoculated or inoculated on the other root half as compared to the no-fungus control, indicating direct and indirect biocontrol effects. Furthermore, the defense enhancement conferred by the fungus was passed on to the progeny; all of the progeny of plants treated with the biocontrol fungus showed enhanced control of the nematode. The mechanism of this heritable priming, which presumably involves epigenetic changes, is yet to be determined. Scientific Reports  10.1038/srep40216 Tags: Applied Plant Biology, Biotic Interactions

One of the many ways that Xanthomonas bacteria manipulate their host plants is by the production of transcription activator-like (TAL) effectors, which the bacterium introduces into the host cell where they alter gene expression in the host nucleus. Schwartz et al. investigated the targets of the TAL effector AvrHah1 produced by the pathogen Xanthomonas gardneri by comparing transcriptomes of plants infected with bacteria producing the effector versus those not producing the effector. Two genes encoding bHLH transcription factors were found to be direct targets of the TAL effector, and a gene encoding a pectate lyase was found to be a target of those bHLH factors. Pectate lyase activity promotes water uptake in the apoplast, presumably through cell wall modification. As water-soaked lesions are a symptom of Xanthomonas infection and thought to contribute to an environment suitable for pathogenesis, this study links the bacterial effector with a susceptibility gene.  Proc. Natl. Acad. Sci. USA    10.1073/pnas.1620407114 Tags: Biotic Interactions, Gene Regulation 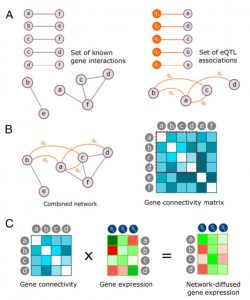