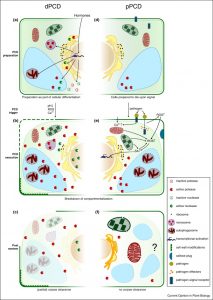 Programmed cell death (PCD) is an active process that occurs as part of normal development and also contributes to defense against pathogens. While there are many similarities in developmental PCD (dPCD) and pathogen-triggered PCD (pPCD), there are also differences. Huysmans et al. review and contrast these two types of PCD. A key conclusion is that “it is still unclear whether a common core machinery exists” between them. Curr. Opin. Plant Biol. 10.1016/j.pbi.2016.11.005 Tags:  Biotic Interactions, Cell Biology, Development, Signals and Responses 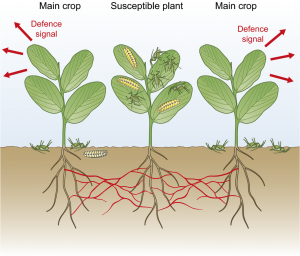 Smell is one of the many senses that insects use to locate the plants that they use as food sources. Plants have evolved ways to exploit insects’ sense of smell, for example by producing volatile compounds that attract pollinators. Pickett and Khan review plant volatile–mediated signals in terms of their contributions to plant defense, for example the production of volatile compounds that deter insects or attract carnivorous or parasitoid insects. Volatiles produced by wounded plants can also be perceived by their neighbors, which respond by priming themselves in anticipation of attack. The authors conclude with a review of agricultural applications of plant volatile-mediated signaling, which offers an attractive alternative to broad-spectrum insecticides. New Phytol. 10.1111/nph.14274 Tags: Applied Plant Biology, Biotic Interactions, Botany 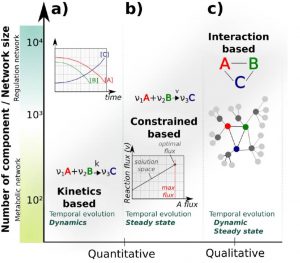 In an interesting and accessible review, Peyraud et al. provide a big-picture view of how systems biology can be used to address plant-pathogen interactions. They describe the core interactions scaling from molecular to ecosystem / environment, and describe the different types of models that can be used to assess and predict the outcomes, as well as the types of data needed for model development. They also point to the many gaps in available datasets and suitable models. The incorporation of a Glossary as well as illuminating illustrations make this paper particularly well suited for teaching. Plant J. 0.1111/tpj.13429 Tags: Biotic Interactions, Education and Outreach, Systems Biology 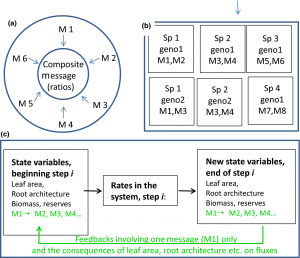 Unravelling the mechanism and signals originating from roots and able to contribute to stomatal control has been the subject of research for decades. In this commentary, Tardieu summarizes and discusses many studies and models on root-shoot signals, including work in the same issue by Visentin et al. which shows that strigolactones in roots are a component of the systemic signal in tomato. Tardieu points out that the nature of the signals reported in the literature is different in different species and experimental systems, and notes, “In my own analysis, none of the control systems considered here can be ruled out based on obvious artefacts or errors of protocols. One must, therefore, live with a diversity of hypotheses.” He concudes with a call for more multi-species meta-analyses and dynamic models. (Summary by Mather Khan) New Phytol. 10.1111/nph.14292 Tags: Botany, Ecophysiology, Physiology, Signals and Responses, Transport 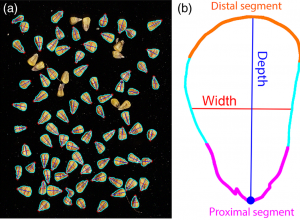 The yield of a maize plant is correlated with the size, shape and number of kernels it produces. Miller et al. have developed an automated system to quantify these crucial attributes from photographs of kernels both on and off the cob. Their methods will enable researchers and breeders to record maize traits with greater precision than previous methods. Plant J. 10.1111/tpj.13320 Tags: Applied Plant Biology, Computational Biology, Growth Regulation 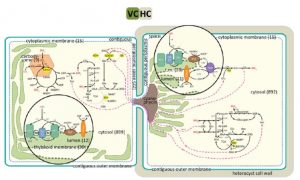 Nitrogen-fixing cyanobacteria such as Anabaena sp. PCC 7120 have the challenge of supporting nitrogenase, an enzyme that is highly sensitive to oxygen, and simultaneously photosynthesis, an oxygen-producing set of reactions. They accomplish this by segregating these reactions into two cells, heterocysts and vegetative cells. Malatinszky et al. curate and compile a stoichiometric model of the flow of metabolites, electrons and fixed nitrogen between the two cells. The model indicates that at least four exchange metabolites are needed for optimal growth and provides a platform for further metabolic engineering studies of multicellular cyanobacteria. Plant Physiol. 10.1104/pp.16.01487 Tags: Biochemistry, Bioenergetics, Computational Biology, Genomics, Metabolism, Systems Biology, Transport 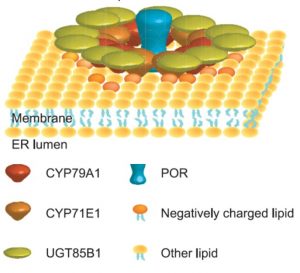 A metabolon is a physical clustering of metabolic pathway proteins. Until now, evidence for metabolons has been patchy, but Laursen et al. convincingly demonstrate the physical association of several enzymes involved in the production of dhurrin, a defense compound of sorghum. They use a method involving styrene maleic acid to stabilize the membrane-bound metabolon, which they then affinity purify and characterize structurally and functionally. Through reconstitution experiments they show that the molecular composition of the lipids at the metabolon affects its efficiency. They conclude by pointing out that efforts to reconstitute metabolic pathways in heterologous systems will be enhanced by a greater understanding of metabolons and the requirements for their assembly.  Science 10.1126/science.aag2347 Tags: Biochemistry, Metabolism 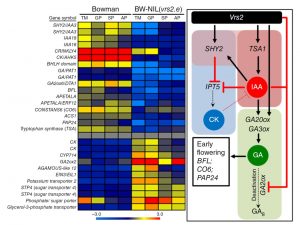 Youssef et al. investigate how the vsr2 mutant affects inflorescence (spike) development in barley. In the two-row variety, at each node there are two sterile spikelets and a single grain forms. In the six-row variety, each of the spikelets is fertile and three grains form at each node. The vsr2 mutation partially converts the two-row form into a six-row form, predominately at the base of the spike. This effect was correlated with higher levels of sucrose and cytokinin and lower auxin levels, and accompanying changes in hormone biosynthesis genes. The Vsr2 locus was found to encode a SHI-type transcription factor, similar to genes shown previously to affect floral development and auxin biosynthesis. Nat. Genet. 10.1038/ng.3717 Tags: Development, Gene Regulation, Growth Regulation 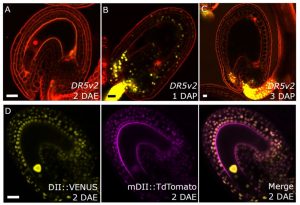 Seed vitality is critical for plants’ evolutionary survival and food production by economic crops such as rice, wheat, etc. Seed formation is preceded by well-coordinated events involving mainly fertilization, endosperm and seed coat formation in chronological order. How is the signal relayed from one event to another to make seeds? Is this signal maternally or paternally derived? What is the nature of this signal? Auxin has already been shown to be coupled to endosperm formation. In this paper, Figueiredo at al. present evidence that auxin is also involved in initiation of seed coat formation via a MADS-box transcription factor. (Summary by Nidhi Sharma) eLife. 10.7554/eLife.20542 Tags: Cell Biology, Development, Gene Regulation, Signals and Responses 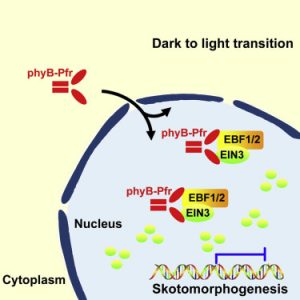 A seedling in the dark produces ethylene, which in a dicot such as Arabidopsis leads to apical hook formation that protects the cotyledons from damage as the seedling pushes through the soil. The emergence of the seedling into the soil causes a rapid transition to photomorphogenesis and a suppression of the ethylene-mediated apical hook. Shi et al. show that perception of light by the photoreceptor phytochrome B (phyB) activates its interaction with the core ethylene signaling protein EIN3 and the promotion of its degradation, providing a molecular basis for the rapid suppression of the ethylene response by light. Devel. Cell 10.1016/j.devcel.2016.10.020 Tags: Development, Gene Regulation, Growth Regulation, Signals and Responses 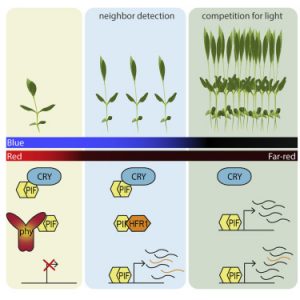 The wavelenghts of light perceived by a plant are information-rich, and plants integrate information from photoreceptors tuned to different wavelenghts to optimize their growth and development. Because plants absorb red light but not far-red light, a low ratio of red to far-red light indicates vegetative shading and promotes an elongation response; the ratio of red to far-red light is perceived by the phytochrome family of photoreceptors. De Wit et al. show that this shade-avoidance response is further stimulated by low levels of blue light, perceived by the cryptochrome family of photoreceptors, and they show that the molecular basis for this response augmentation is mediated by PIF transcription factors. In a linked paper, Goyal et al. show that phototropism (growth towards light), mediated by the phototropin family of blue-light receptors, is enhanced in shade, mediated by PIF effects on auxin synthesis. Curr. Biol. 10.1016/j.cub.2016.10.031  and 10.1016/j.cub.2016.10.001 Tags: Abiotic Interactions, Biochemistry, Development, Ecophysiology, Gene Regulation, Molecular Biology, Signals and Responses 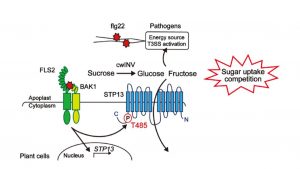 When villagers see the marauding hordes approaching, they secure their food sources. Similarly, when the cell-surface FLS2 receptor detects a bacterial pathogen, it (through its co-receptor BAK1) phosphorylates and stimulates the activity of a cell-surface sugar transporter (STP13), leading to the uptake into the plant cell of apoplastic sugars, thus depriving the pathogen of food and restricting the bacteria’s ability to deliver virulence factors. As summarized by Yamada et al., “Competition for sugar thus shapes host-pathogen interactions”. Science 10.1126/science/aah5692 Tags: Biochemistry, Biotic Interactions, Molecular Biology, Transport 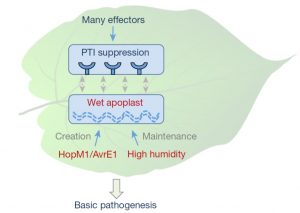 Although it is widely accepted that high humidity has a strong influence on plant diseases of the phyllosphere (the above-ground portions of the plant), the molecular basis is not understood.  Xin et al. report that an important step in bacterial infection of the phyllosphere is a pathogen-driven humidity-dependent establishment of an aqueous intercellular space (apoplast). The authors found that only two plant functions, pattern-triggered immunity and water limitation in the apoplast, must be altered to enable non-pathogenic bacterial infection of host plants. Furthermore, the Pseudomonas syringae HopM1 effector stimulates the establishment of the aqueous apoplast and can transform non-pathogenic P. syringae strains into virulent pathogens under certain conditions. (Summary by Bhavisha Sheth) Nature 10.1038/nature20166 Tags: Biotic Interactions, Cell Biology, Genetics

Traditionally, the production of hybrid maize seed involved the removal of male flowers to prevent self-fertilization of the female flowers. Rice produces bisexual flowers, so mechanical emasculation is not as amenable. Therefore, hybrid rice production requires that the female parent be genetically male sterile. There are several tactics to achieve this including conditional male sterility and cytoplasmic male sterility, but in every case the propagation of the male-sterile line is difficult. Chang et al used a nuclear-encoded male-sterility gene, OsNP1, to resolve this conflict. Into a osnp1-1 (male sterile) background, they introduced a transgene that 1) restores male fertility of the sporophyte, 2) makes pollen grains inviable, and 3) marks pollen carrying the transgene with red-fluorescent protein. Through self-pollination and seed sorting, this strategy produces both male-sterile plants for hybrid seed production and a fertile maintainer of male sterility. Proc. Natl. Acad. Sci. USA  10.1073/pnas.1613792113 Tags: Applied Plant Biology, Genetics, Molecular Biology 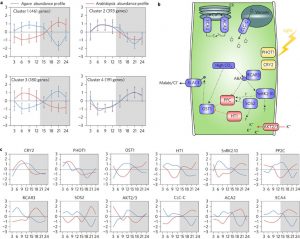 Crassulacean acid metabolism (CAM) is a specialized form of photosynthesis that greatly increases water-use efficiency by taking up CO2 through stomata that are open at night (when evapotranspiration is low). Engineering plants that can switch to CAM during periods of drought is a key goal towards improving agricultural water efficiency, but how CAM plants achieve the unusual temporal activity patterns of metabolic enzymes and the corresponding metabolites has remained uncertain. Abraham et al. compared RNA, protein and metabolite temporal patterns between Agave (a CAM plant) and Arabidopsis (a C3 plant). Amongst their findings was a rescheduling of expression of core ABA signalling genes involved in stomatal functions. Nature Plants. 10.1111/tpj.13429 Tags: Biochemistry, Ecophysiology, Environmental Plant Biology, Gene Regulation, Physiology 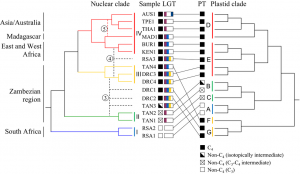 It has been stated that adaptive evolution occurs in plant populations with respect to various complex traits. Olofsson et al. validated the hypothesis that different components of a complex trait can evolve in isolation and later be combined by gene flow by using C4 photosynthesis as a study system. Local adaptations might fix certain alleles due to limited gene flow in various populations, but their subsequent combination facilitated by population mixing likely improved the efficiency of the C4-photosynthetic system as a whole. (Summary by K K Sabu). Mol. Ecol. 10.1111/mec.13914  Tags: Botany, Evolution, Genetics

Plant pathologists like all other scientists are imparted scientific knowledge and technical expertise, building the educational side of their career. Beckerman and Schneider emphasize the pressing needs of teaching ‘soft skills’ scientists need in order to improve their leadership and professional management abilities in advancing their careers. The authors emphasize the strategic inclusion of ‘soft skills’ training to scientists at all levels without affecting their routine scientific training. The training of next generation plant pathologists and scientists should be so as to prepare them with much more than scientific knowledge and technical expertise. (Summary by Bhavisha Sheth) Plant Disease 10.1094/PDIS-03-16-0354-FE  Tags: Education and Outreach