This Research in Focus is written by science writer Peter Minorsky (ASPB and Mercy College) who writes the monthly On the Inside column for Plant Physiology. This summary describes a paper by Castelblanque et al., in the October 2016 issue.

Laticifers are specialized cells (or row of cells) that synthesize and accumulate latex. The latex produced, which is often milky in appearance, is highly variable in its chemical composition, and contains suspended colloids as well as a variety of dissolved solutes and macromolecules.  Latex is produced in approximately 12,500 plant species, representing approximately 10% of all flowering plants. Laticiferous species belong to 900 genera in approximately twenty plant families growing in a variety of ecological settings. Thus laticifers appear to be polyphyletic in origin. Moreover, their absence in primitive angiosperms suggests that these cells developed more recently than most other cell types. The aspects of laticifers that have been more deeply studied are those related to the physiology and role of laticifers in the production of latex in Hevea brasilensis or Papaver somniferum as a source of rubber and opium, respectively [Hagel et al. (2008), Konno (2011), and Pickard (2008)].

There has also been discussion of the relevance of laticifers for insect defense, and their involvement in the transport pathways of natural products. However, there remains a paucity of information regarding the mechanisms of laticifer cell differentiation, their precise ontogenic origin, and the organization of the laticifer system within the plant body.

In a new paper, Castelblanque et al. have developed cellular, molecular and genetic tools to examine the distribution, differentiation, ontogeny, and other characteristic features, as well as the potential developmental role of laticifer cells in the latex-bearing plant Euphorbia lathyris. A whole-mount histochemical staining procedure revealed about 20 laticifer cells running the length of the hypocotyl of E. lathyris: the average length of these cells (9 cm) makes them some of the longest and largest cells known. Symmetric pairs of elongated laticifer initials in the early stages of laticifer cellular differentiation (e.g., carrying 8–12 nuclei) were detected at the heart stage of embryo development. By identifying laticifer mutants, the authors also demonstrate that laticifers and latex production are not essential for plant growth and development. These findings suggest that laticifers may be important, instead, for specific ecophysiological adaptations such as herbivore resistance. 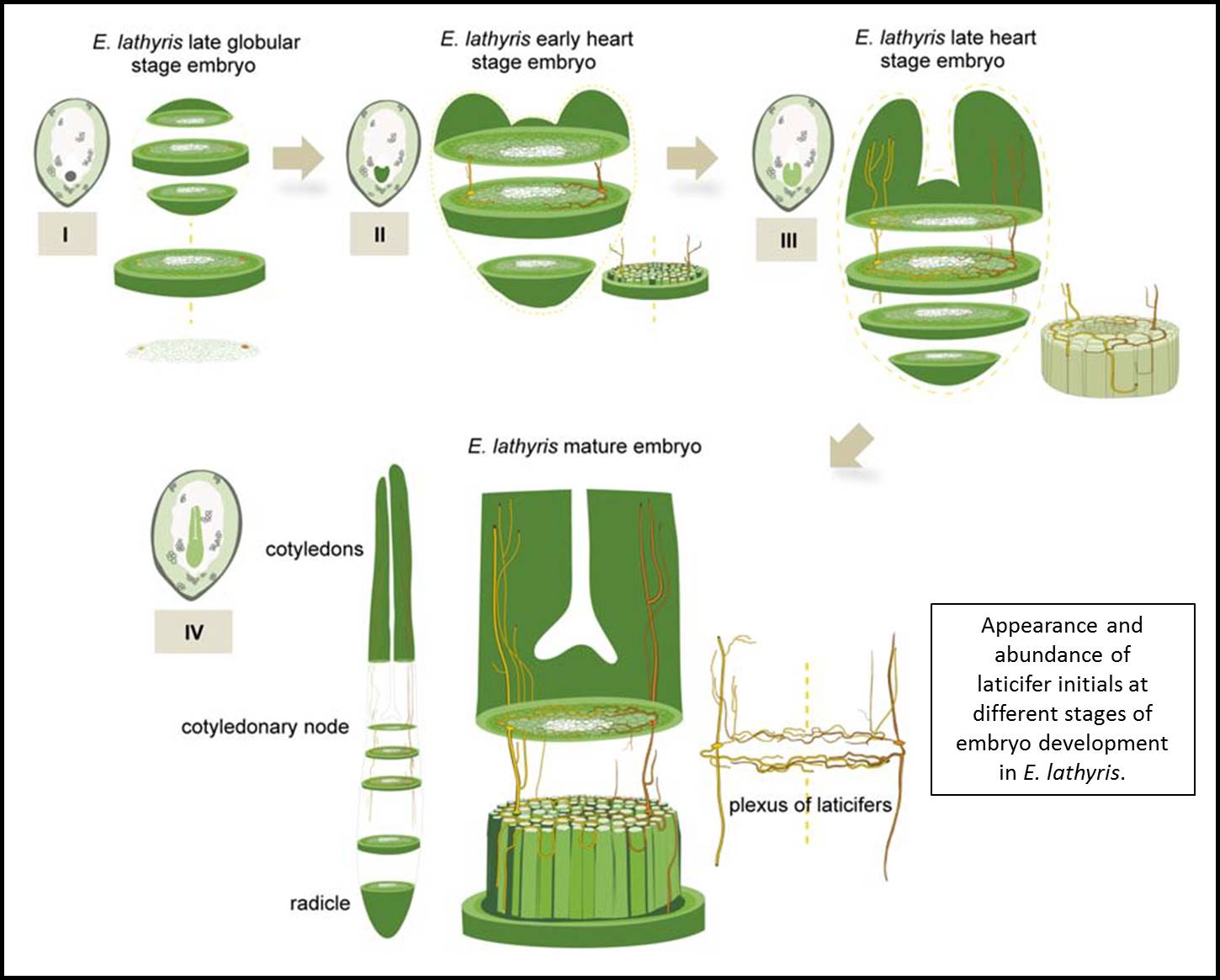