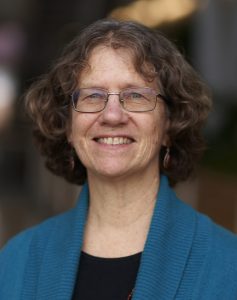 Elizabeth (Toby) Kellogg is the Robert E. King Distinguished Investigator at Donald Danforth Plant Science Center, St. Louis. She is passionate about understanding the factors that determine how domesticated cereal crops differ from their wild relatives and from each other, especially in their morphology. Her team uses comparative genomics to identify key genetic components that can lead to increasing biodiversity in wild grasslands and improving environmental adaptation in important food crops.

Two early encounters strongly influenced Toby’s research trajectory. First, Jim Birchler showed her a picture of a bushy maize mutant with many tillers and leaves. Toby, who was trained in herbarium taxonomy, was asked what would she do if she found the plant in the wild. After she responded that she would put it in another genus, he told her that the morphology was caused by a change at a single locus. It struck her that “some apparently dramatic morphological changes might be quite simple genetically.” The other experience was reading the publications by John Doebley and Adrian Stec using quantitative trait locus (QTL) mapping to identify the domestication loci in maize in the early 90’s. She realized that this could be a powerful, universal approach to discover the genes underlying any traits in other systems.

Toby was in the middle of a zoom meeting with her lab when she got the phone call from Pam Soltis. She recounted, “In the back of my mind I was wondering what Pam could be calling me about – maybe she needed me to serve on a committee? Or perhaps write a review? I was astonished when she said that I had been elected to the National Academy of Sciences. The NAS zoom conference was even more astonishing. I think I managed to say thank-you but was too stunned to say much else.”

“Science is a privilege, and discovery is a gift.” Toby describes research as a community effort: “We are able to pursue our scientific goals because of immense support from the society in which we live, in the form of institutions (universities, government agencies) and grant dollars. My own work has been the product of input and support from students, post-docs, colleagues, collaborators, friends, and family.”

Toby first joined ASPB in 1994, and she has been serving on the editorial board of Plant Physiology since 2005. Toby encourages early career researchers to be curious: “Influential discoveries are often built on a foundation of dozens of careful observations and focused experiments, many of which would have been done with limited resources. Identify gaps in knowledge and explore with the resources in-hand. There are always ways to contribute to science.”