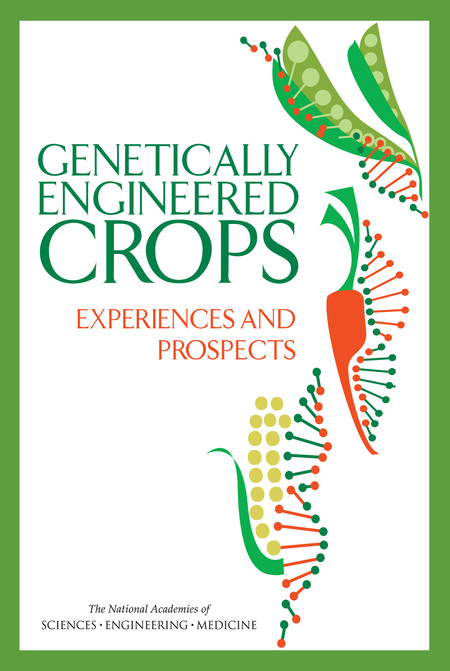 government, but does not hold law-making powers.  The National Academies recently released a report, “Genetically Engineered Crops: Experiences and Prospects”. The report was commissioned to examine the evidence behind some of the claims made about GE crops, both those that claim great benefits and those that claim great risks, and it was sponsored by the Burroughs Wellcome Fund, the Gordon and Betty Moore Foundation, the New Venture Fund, and the U.S. Department of Agriculture, with additional support from the National Academy of Sciences.

One of the main conclusions of this 400 page report is that we should refine our conversations and get away from the binary (GE or not-GE) arguments and instead talk about specific crop varieties, focusing on their traits rather than the process through which they were produced. The report also observes that even in terms of process, the line between GE and non-GE is blurred by new methods such as gene editing by CRISPR/Cas, RNAi and many forms of mutagenesis that are not classically defined as genetic engineering.

Other conclusions of the report are:

Evidence for each of these points, drawn from the primary literature and placed into context, is presented in the report.  Although long, the report is well organized and it would be good to familiarize yourself with its contents (it is free to download) You can also download read a four-page PDF report summary, see videos from the public release event, and browse some of the evidence and presentations viewed during the preparation of the report here.s

Several news organizations and individuals provided useful context and thoughtful opinions about the release of this report, including: