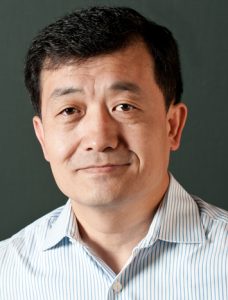 Zhiyong Wang grew up in Wuda, a small coal-mining town in northwest Inner Mongolia, China. He received his BS in plant physiology from Lanzhou University, China, and his MS from the Institute of Botany, Chinese Academy of Sciences. Later, he received his PhD in molecular, cell, and developmental biology from the University of California, Los Angeles (UCLA). After completing his PhD, he received an NSF Postdoctoral Fellowship in Biosciences Related to the Environment and worked as a postdoc in Joanne Chory’s lab at the Salk Institute for Biological Studies. Zhiyong joined the Department of Plant Biology at the Carnegie Institution for Science as a staff member in 2001 and was appointed acting director in 2018.

Zhiyong’s research focuses on understanding how plant growth is regulated by environmental and endogenous signals. His PhD research identified the first plant clock gene, CCA1, and his postdoctoral research demonstrated the first example of ligand–receptor kinase interaction in plants. His current lab uses a wide range of cutting-edge technologies in proteomics and genomics, as well as traditional genetic and molecular approaches, and both model systems and crops to address broad research questions.

The Wang lab has made major contributions to our understanding of cellular signaling mechanisms in plants, including the brassinosteroid (BR) signaling cascade from a receptor kinase to transcription factors, the BAP/D central network that integrates major growth regulation signals (BR, auxin, gibberellin, light, temperature, the circadian clock, sugar, and pathogen signals), the BR gradient and BR–auxin antagonism that control root growth, and the O-GlcNAc modification network that couples cellular metabolic status with signaling and regulatory networks. He believes these signaling mechanisms will provide targets for genetic engineering of high-yield crops. Currently, his lab is mapping the cellular protein networks using proteomic approaches with the aim of a complete understanding of the protein and gene networks that regulate plant growth and environmental adaptation. Zhiyong was elected a fellow of AAAS and received the Alexander von Humboldt Research Award in 2015.

I guess my childhood experience had a big influence on me. I grew up in a small town in the middle of the desert in Inner Mongolia. My father and family always grew vegetables in the yard. So for me, a fun part of childhood was to prepare the soil, plant seeds, watch them grow out, and enjoy the fresh vegetables. My favorite vegetable was tomato. Outside the small town was mostly desert, and there were not even many trees in the town. It was an environment that stimulated a love of plants and a childhood fantasy of turning desert into forest.

After high school, I chose plant physiology as my major at Lanzhou University, and I have studied plant physiology ever since. When I did my master’s degree at the Institute of Botany in Beijing, we did not have the tools to understand molecular mechanisms, but the literature about receptor kinases that cells use for recognizing incompatible pollen fascinated me. So I did a little project that attempted to find the pollen signal for the receptor kinase using two-dimensional gel electrophoresis. I did detect some interesting gel spots, but at that time we did not have mass spectrometry to identify the proteins. I knew I had to go abroad if I wanted to become a scientist who makes important discoveries.

When I did my first rotation at UCLA with Elaine Tobin, I got hooked on the phenomenon of photomorphogenesis, or how plants use light signals to control gene expression and growth. My rotation project was to sequence a gene that encodes a transcription factor that controls light-responsive gene expression. I found the work so interesting that I decided to continue it as my thesis research. In the end, I figured out that the gene, now named CCA1, not only drives light-responsive gene expression, but also is a central component of the circadian clock.

For my postdoc, I did not want to move far from this interesting phenomenon but wanted to learn new approaches and techniques and work on a different subject. BRs were discovered to be a major player in photomorphogenesis right when I was thinking what to do next. I thought it could be nice to learn genetics from Joanne while studying the same phenomenon, photomorphogenesis, but a different signal, brassinosteroids. I thought maybe one day I would be able to explain how light and hormones act together in the regulation of plant growth.

What scientific discoveries over the past couple of years have influenced your research directions?

One of the discoveries that influenced our research direction is the finding of the BAP/D module (BZR-ARF-PIF/DELLA), which integrates light and hormonal signaling pathways in photomorphogenesis. My lab, and most labs in the plant biology field, used to focus on one signal and its signaling pathway, asking how this one signal regulates plant growth or how plants respond to this signal. The finding of the BAP/D module showed us that the signaling pathways are integrated, rather than independent, and that there is perhaps a central integrator that controls growth; in this case, the integrator seems to be a four-member committee, each member representing different constituents.

Then my research field expanded from the BR pathway to other pathways such as auxins, gibberellins, and temperature responses. With this new framework of thinking, we also started to ask different questions. For example, sucrose is one important signal for the decision to grow or not and to elongate or not. Little is known about how the growth decision takes sugar availability into consideration.

Another area of advancement that influenced our research direction is the breakthrough advances in proteomic technologies. The mass spectrometry instrumentation keeps improving in sensitivity, capacity, and data coverage. The technology has become so powerful that we are generating more data and discoveries than my lab can follow up with. For example, we recently published the first proteomic data set of 262 O-GlcNAc modified proteins. Before our study, there were about a half dozen such proteins reported in plants. This data set provides a parts list for us to establish a sugar signaling network that impinges on other regulatory mechanisms such as hormone signaling, transcription, and RNA processing. Consequently, our recent research focus has shifted toward sugar signaling and posttranslational protein networks that control plant growth and environmental adaptation.

I follow Science, Nature, and The Plant Cell as key journals. Generally, I search keywords such as brassinosteroids to stay updated on progress in the field.

What do you think is the next big thing in plant biology?

Proteomics is poised to have a major impact. Proteomics is an old name but a new game that is not fully appreciated by the plant community, in my opinion. Until recent years, discovery by proteomics used to rely on some luck because the technology was there but not efficient. So if you were lucky, you could find something. Nowadays, if you do a mass spectrometry experiment, you will most likely find something you are looking for. For example, in our recent phosphoproteomics study of BR-induced phosphorylation events, we found more than half of the signaling components that the research community had discovered in the past 20 years. Thus, with one proteomics experiment, you can discover pretty much all major components of a signaling pathway.

In addition, new efficient tools are being developed for analyzing protein–protein interactions. Complete protein networks of plants, with spatial and dynamic information, will enable engineering and synthetic biology.

What keeps you inspired in your field of research?

I take pleasure from answering scientific questions that not only satisfy my curiosity but also have the potential for changing the world, such as increasing crop yields. It’s also satisfying when I see my students and postdocs succeeding in their careers. Another source of inspiration are the role models I have had the privilege to associate with in person, such as Winslow Briggs and Joanne Chory. I feel privileged to have the opportunity to work at one of the best research institutions in the world and obliged to make my own contributions.

In a bigger picture, I do hope that one day my research will benefit society. Whenever we have research funding, I have tried doing research on crops to see whether my research on Arabidopsis can be translated to other crops. Or maybe someday I can develop plants that will grow in the desert to make my hometown green and mitigate climate change. Plant science has a mission to save the future world.

If you had 6 months off, what would you do with your time?

If I had the time, I would work in the lab, do some experiments, and test some of the risky ideas. Also, I would learn some computational software skills.

If you were able to repeat your graduate or postdoc work, would you do anything differently?

Probably not. I like working in plant science. I consider myself very fortunate to have had great mentors and to work on exciting research projects.

What advice would you give to students interested in plant biology?

My advice would be, follow your interest. It’s an exciting time for plant biology.

As an employer, what are the five key qualities you look for in a potential team member?

The qualities I look for are the qualities important for a successful scientist. These include curiosity, passion about science, logic, common sense, and creativity.

Do you have any hobbies?

This interview was originally published in the ASPB News “Luminaries” column. Student and postdoc members are invited to submit their ideas for a 500- to 750-word interview they might like to conduct with a prominent scientist. Contact Membership Committee Chair José Dinneny at dinneny@stanford.edu, who will help you develop some questions to frame your story. If we publish your interview, you will receive a $50 Amazon gift card.