Arabidopsis thaliana has been an excellent model for the dissection of molecular plant-microbe interactions, including responses to pathogens. Studies in Arabidopsis have identified core components of signaling pathways involved in sensing and responding to pathogen associated molecular patterns (PAMPs), which including chitin (a structural carbohydrate of fungal cell walls) and flagellin (an abundant bacterial protein). The defense response triggered by conserved pathogen markers is known as PAMP-Triggered Immunity (PTI) (Jones and Dangl, 2006; Zipfel, 2009).

In a paper newly published in The Plant Cell, Bressendorff et al. extend our understanding by identifying genes involved in PTI in the moss Physcomitrella patens. P.patens is an early-diverging land plant that has well-developed genetic resources including a sequenced genome and the ability for gene disruption or replacement through homologous recombination. The paper, called, “An innate immunity pathway in the moss Physcomitrella patens”, identifies genes with homology to those involved in PTI in Arabidopsis, and assesses their function through gene knock outs.

The authors first characterized Physcomitrella’s reponses to chitin. These responses include rapid growth inhibition, deposition of cell-wall materials, and a fluorescent burst. They then identify a moss gene encoding the chitin receptor CERK1. Knocking out this gene in moss eliminates the growth-inhibitory response and other responses induced by chitin (Figure 1).

The Arabidopsis genome encodes 60 MEKKs, 10 MKKs, and 20 MPKs, some but not all of which have been demonstrated to have a role in transducing signals from PAMP receptors to the induction of pathogen-response genes. Some of the known interactions in Arabidopsis are shown in Figure 2 (adapted from Rasmussen at al 2012). 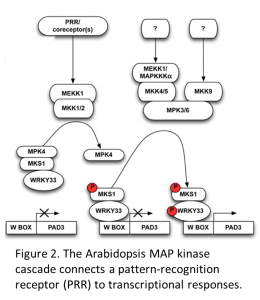 Next, moss homologues of Arabidopsis kinases involved in PTI signaling were identified by homology, and their function assayed in mutants generated by homologous recombination. The double knock-out line Δmekk1a/b shows severely reduced defense responses including toluidine blue staining, MPK phosphorylation and PAL and CHS expression. The specificity of these responses is demonstrated by their absence in Δcerk1 moss lines that lack the chitin receptor CERK1 (Figure 3). Similar approaches implicate some of the moss MKKs in the responses to chitin. 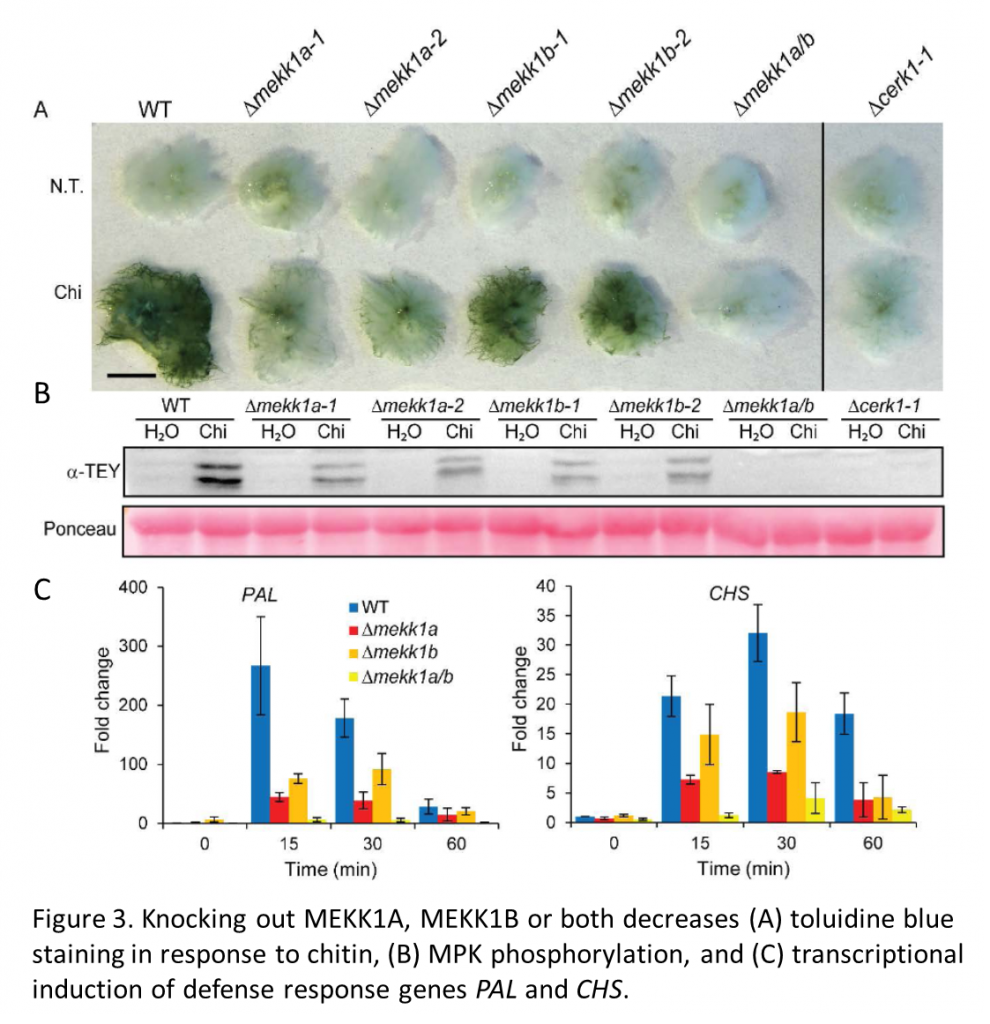 Finally, the role of the moss MPK4a and MPK4b genes in innate immunity were examined. These genes are close homologues of Arabidopsis MPK4 which has previously been shown to have a role in immunity. Phosphorylation studies of the knockout lines implicate both moss genes in the immune response. The growth of pathogenic fungi is enhanced in the Δmpk4a knockout lines, further demonstrating a functional role of this map kinase in defense.

Thus, starting with the well-characterized pathogen-triggered immunity pathway in Arabidopsis, factors contributing to innate immunity in moss have been identified, from receptor to transcriptional activation. The similarity of the genetic pathways in Arabidopsis and P. patens suggests that such a pathway could have been present and functional more than 500 million years ago in the bryophyte/ angiosperm common ancestor. This work also lays the foundation for further explorations of innate immunity in this important and versatile model organism.